The ravishingly beautiful Great Conservatory in Syon Park makes an idyllic setting for Lady Mary to take tea with Lord Gillingham in the series Downton Abbey. 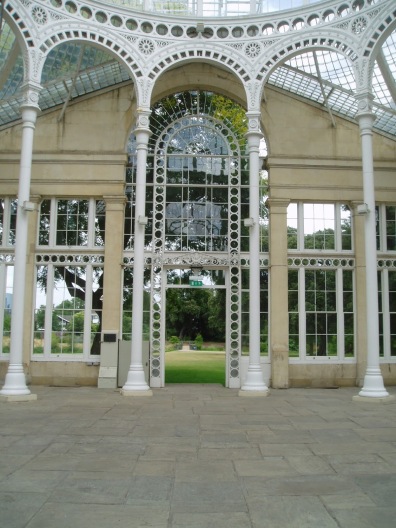 The soaring white metal work of this backdrop contrasts with the lush greenery spilling from the classic Italian planters decorating its interior, creating a gorgeously romantic scene. 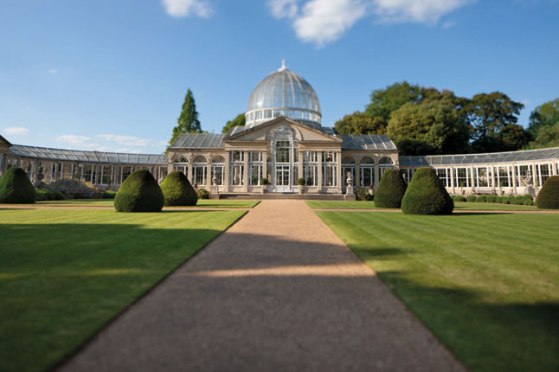 The Great Conservatory was designed by Charles Fowler and built in 1830. A Greek cross is the theme of the tropical house and this building’s spectacular glass dome is thirty eight feet in diameter. A conservatory constructed of metal had never before been attempted and its scale is particularly impressive with a frontage of two hundred and thirty feet.

Syon Park’s position, on the banks of the Thames only ten miles from London, is just across the river from Kew Gardens, and attracted the talents of J.M.W. Turner whose painting Zion House, Isleworth captures its beauty.

Sir John Betjeman sang the praises of Syon House and its 200 acre park when he described it as ‘The Grand Architectural Walk’. It is the London home of the Duke of Northumberland, whose family have lived there for more than 400 years. Originally the site of a medieval abbey which was dismantled by King Henry VIII in 1539 the current building and park are now a site of Special Scientific Interest.

Syon’s Italian Renaissance exterior was built in 1547 during the tenure of the 1st Duke of Somerset but it is its famous ‘Adam style’ that distinguishes the house’s interior. This came about when lst Duke of Northumberland commissioned Robert Adam to carry out a refurbishment 1762.

An eclectic mix of architectural influences inspired Adam including Baroque, Mannerist Gothic and Ancient Roman styles. The Long Gallery is one hundred and thirty six feet in length and the state rooms are a must-see as they remain completely intact from the day they were built.

In its march through history Syon House has been visited by or associated with King Henry VIII, Catherine of Aragon, Lady Jane Grey and Charles I.

Syon House and Park, including the Great Conservatory, are open to the public in the summer months and there is every reason, as the 3rd Duchess of Northumberland said, to visit ‘this delicious place’. 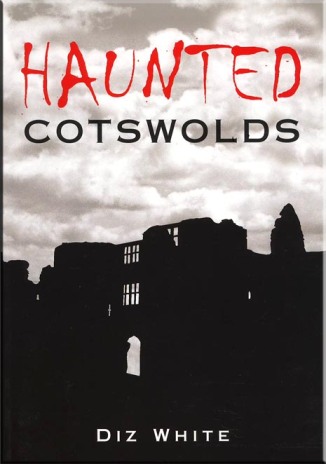